Buses are an integral part of the nation’s infrastructure – in 2015, there were more than 800,000 registered buses operating in the United States, according to the Federal Motor Carrier Safety Administration (FMCSA). This is especially true in Dallas, where buses are an essential form of public transportation. The Dallas Area Rapid Transit (DART) system offers bus lines as a reliable alternative to driving, while the Dallas County Schools system provides a convenient school bus service to North Texas, allowing children to freely travel to and from school to the relief of working parents.

However, when buses end up in accidents, the results can be disastrous. Consider that one bus driver is responsible for the lives of multiple passengers (often children) on the road. Emotional distress, serious injuries, and even death can occur if the driver makes one wrong move or does not practice safe driving principles.

Seeking assistance during the aftermath of a devastating bus accident can be extremely difficult, especially if you’re not sure of the steps you need to take. The relationship between passenger, bus driver, bus company, and other associated parties can make the resolution process incredibly messy and confusing. Consulting an attorney is heavily recommended if you do not know where to start.

Statistics of Bus Accidents in the United States

Buses have gotten safer and more regulated through the years, but accidents still happen.  Despite a drastic decrease in the rate of fatal bus crashes, and overall collisions still occur at an alarming clip. 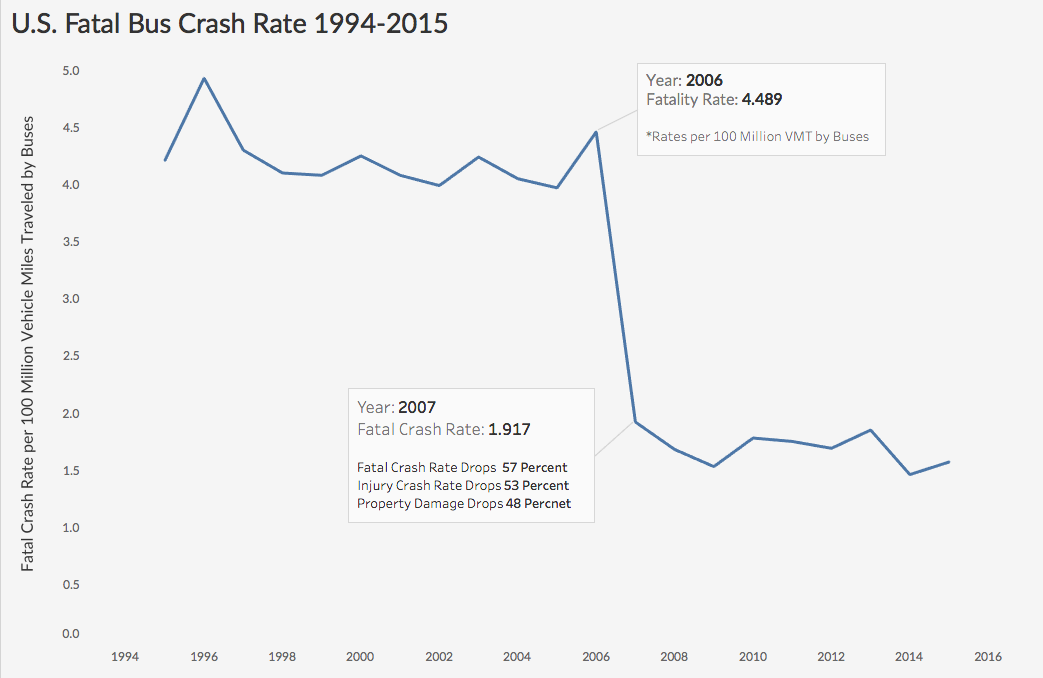 The Texas Department of Transportation has further statistics on the state of bus safety in Texas.

How are Bus Accidents Different from Regular Car Accidents?

While both are categorized as traffic accidents, there are significant differences between routine automobile accidents and bus accidents.

Because of the complexity of bus accidents, it’s a good idea to consult an attorney the moment you are involved in one.

In a severe bus accident, individuals can suffer serious injuries and long-lasting emotional and mental ailments. This includes:

The Dallas Area Rapid Transit system is Dallas County’s prolific public transportation outlet, and it is extremely popular. The bus branch of the DART has a fleet of 652 buses that receive incredible amounts of passengers daily. In 2016, ridership reached 33.7 million passenger trips.

While DART buses can be an incredibly convenient method of transportation and a respite from the oppressive Dallas traffic, it can also be unsafe for passengers. In the event of a collision, passengers can sustain serious, incapacitating injuries, or even die. Most DART buses do not have seat belts, and the massive size of DART buses can often result in severe damage and destruction.

If you or a loved one has been involved in a DART bus crash, consult with an experienced DART bus attorney. Whether you’re a passenger, motorist, pedestrian, or other involved party, an attorney can help ensure you are taking the steps necessary to receive your due compensation.

This is certainly true in Dallas. The Dallas County Schools Transportation Department operates more than 1,900 buses in 12 school districts across North Texas. That’s nearly three times as many as the fleet of DART buses.

Additionally, since 2009 at least 86 student passengers were injured in Dallas school bus crashes.

When a child is injured in a school bus crash, it can change your life dramatically. While physical injuries can be stressful and the financial hit can be costly, it’s the long-lasting emotional and mental repercussions for both you and your child that may be the most dangerous of all. And because it’s a school bus accidents, finding the answers to any potential compensation or justice can be complicated.

It’s very necessary to consult an attorney who specializes in bus accidents in this case. The understand the basic legal rights and options for school bus passengers involved in an injury accident.

While DART buses and school buses make up most serious bus accidents (in 2015, they accounted for 74% of all fatal bus crashes in Texas), other types of buses can prove to be dangerous as well.

Who Can Be Responsible for a Bus Accident?

If you or your loved one has suffered due to a bus accident, you may be entitled to a proper claim. Because buses are usually commercial vehicles, there may be multiple parties involved, and it can get difficult to figure out who can be responsible for your accident.

When Can I File a Claim for a Bus Accident?

The sooner you file a claim with the responsible party, the better. Certain bus providers, such as DART and school districts, have strict deadlines when it comes to properly notification that a claim has been filed. Failure to timely file a claim or to follow proper procedures can hamper your ability to recover damages. Consult a Dallas bus accident attorney for details and assistance in this matter.

If you or your loved one has been involved in a serious bus accident, you may be eligible to receive compensation. Bus accidents are a serious matter, with potentially incapacitating injuries that can lead to physical pain, mental anguish, and financial ruin. Contact an experienced Dallas bus accident lawyer at the Law Firm of Aaron A. Herbert. We’ve recovered millions of dollars for accident victims and their families. Call us today for a free consultation – if we determine you have a valid case, no fee or expenses will be charged until the case is won.