If a Jaywalker Is Hit by a Car, Who’s at Fault?

When we think of accidents involving pedestrians and fault, we often assume that the motorist is at fault. In driver’s education courses, we’re often taught that pedestrians have the right of way. In certain situations, however, pedestrians can be liable for accidents, either partially or wholly.

How Do We Determine Fault?

Imagine witnessing an auto accident involving a pedestrian. When telling a friend about the accident, you maintain that it was the pedestrian’s fault because he or she ran out in front of the vehicle before the driver could react. In some cases, assigning fault is this simple. There’s little a motorist can do when a pedestrian runs out in front of traffic. In these situations, witness testimony like yours may help an insurance adjuster arrive at that decision. Insurers may also look at police reports, traffic cameras, and whether or not the driver was following all applicable laws.

What if The Driver is at Fault?

In the case that the driver is wholly at fault, the pedestrian will easily recover damages from the driver’s insurance policy for economic and general damages. The main hassle in these circumstances is fighting with an insurance company to raise its lowball offers.
In the event that a pedestrian shoulders all the blame for an accident, he or she likely won’t get compensation for subsequent injuries. In fact, the driver may be able to file a claim with the help of a personal injury attorney if he or she was injured in the process of swerving, or if the insurance company won’t cover the full cost of property damage.
Instances in which a pedestrian may be fully at fault include jaywalking (crossing in the middle of the street), crossing against a traffic signal, walking along a highway, or walking while intoxicated. 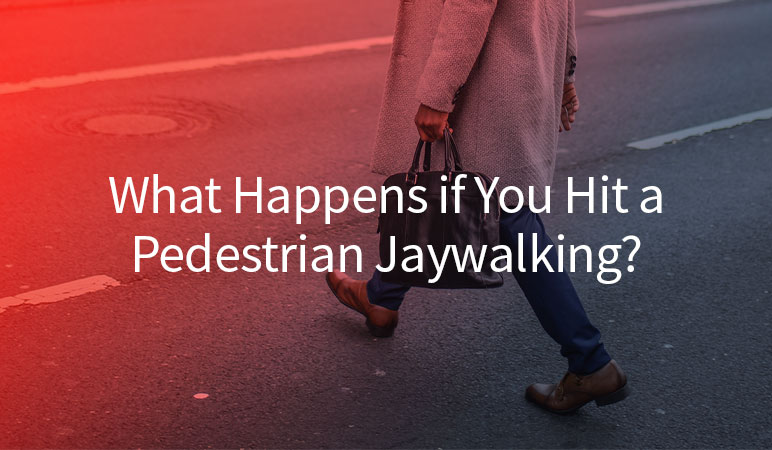 What About Shared Fault?

Even in these scenarios, a driver may shoulder at least part of the blame for an accident. For example, a motorist may be partially at fault for a jaywalking accident if he or she was speeding even just a few miles over the limit. Distracted driving is another common reason for shared fault in jaywalking cases.
When both the pedestrian and driver are a fault, the courts turn to one of two different legal concepts to guide their decisions in personal injury claims: contributory negligence or comparative negligence.

What Is Comparative Negligence?

Most states, including Texas, use the principle of comparative negligence to determine the proportion of fault in personal injury cases. A handful use an all-or-nothing system called contributory negligence to settle personal injury claims, stating that a guilty party must be 100% at fault for an injured person to collect a personal injury settlement. While these cut down on the number of personal injury cases the courts see, they’re rarely fair.
Dallas and surrounding areas use a comparative negligence rule when an injured person, like a jaywalking pedestrian, shares some of the blame for an accident. Under this rule, the victim can collect damages from another at-fault party, but the settlement will be reduced by his or her fair share of fault.
For instance, imagine a driver was texting a friend when a jaywalker stepped out in front of him or her. The vehicle strikes the pedestrian, causing extensive injuries. The pedestrian sues the driver for damages, and a jury determines that the driver was 60% at fault for the accident. The pedestrian is entitled to damages minus his or her proportion of fault.
Texas follows what’s known as the 51% rule, meaning an injured party can recover damages if he or she is 50% at fault or less.

Have You Been Injured in a Pedestrian Accident?

If you’ve been injured by a vehicle, you may be eligible for compensation—even if you were jaywalking. Learn more about our Dallas Pedestrian Accident Attorney services by scheduling a consultation for a free case evaluation to see if you qualify.