Dashboard cameras have grown in popularity among drivers now that this technology has become more affordable. Dash cams can record what goes on inside or outside the cab of a car, including auto accidents. They can be useful as a source of evidence during a car accident insurance claim or civil lawsuit.

Many drivers do not understand, however, the legalities of dashboard cameras. Using a dash cam incorrectly could get you into legal trouble by breaking the state’s windshield requirements or federal surveillance laws. Learn the laws in Texas before you install your device.

What Is a Dash Cam?

A dashboard camera, or dash cam, is a small video camera that attaches to a vehicle’s windshield or dashboard and continuously records video footage of either the road (when pointing out) or the inside of the car (when pointing in). There are many different dash cam models available on the market today.

Some are connected directly to the battery of the car, while others connect to the cigarette lighter or a USB port. The cost of a dash cam runs around $60, on average, although there are much more expensive models with additional features.

Why Are Dash Cams Useful?

Many drivers use dash cams to record the road in case of a car accident. If you have a dash cam, when you start your car, it will automatically turn on and start recording digital footage. It is capable of recording many hours of footage while you drive. The footage can be stored in the device or – in more advanced models – sent directly to the cloud. If a crash does take place, either involving your car or right in front of you, your dash cam may have caught important footage of the accident.

Dash cam footage is admissible as evidence in most car accident cases in Texas. You can submit it to your insurance company to prove that you didn’t cause the accident to prevent your premiums from unfairly increasing, for example. You could also use it if your car accident case has to go to trial in Texas. The video may serve as proof against the other driver for making a mistake that caused the crash, such as driving while distracted or running a red light. In this way, dash cam footage can provide important evidence during a crash case.

A dash cam could also save time and energy on obtaining and verifying eyewitness accounts. Rather than only having eyewitness statements to depend on, you can produce irrefutable video evidence of the cause of your crash. Finally, dash cam footage could protect you and others from insurance fraud. A common scam is a driver intentionally causing a crash and blaming the other driver. Submitting your dash cam evidence of the event to an insurer could lead to penalties against the fraudster – ultimately reducing insurance rates for all auto insurance consumers. 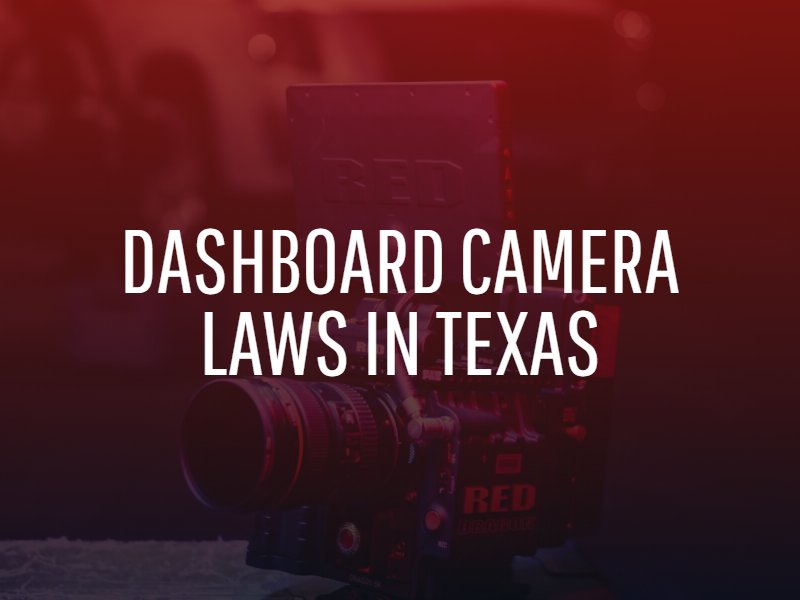 Are Dash Cams Legal in Texas?

Federal law permits the use of dash cams. Many different states, however, have passed their own laws regarding them. Texas law does not specifically mention dashboard cameras. It does not make them legal or illegal; it remains neutral on the subject.

This means that you can lawfully use a dashboard camera in the State of Texas, as simply not mentioning something in the language of the law does not make it illegal. It is legal in Texas to use dash cams to record the road as well as the inside of the cab of a vehicle. You must make sure the placement of your cameras and the equipment used, however, meet Texas’ related laws. As of 2021, these laws include:

Position your dashboard camera in a way that does not reduce or obstruct your view of the road. Most people recommend attaching it in the bottom left or bottom right corner of the dashboard, or directly behind the rearview mirror. It is generally best not to attach it to the windshield itself. Try to find the smallest dash cam you can to make sure you are not obstructing your vision. Do not watch dash cam footage behind the wheel, and make sure you obtain permission before audio recording anyone.

If you drive out of Texas and into other states with a dashboard camera attached to your vehicle, make sure you understand the laws in each state. Most states have similar laws to Texas. Some prohibit windshield-mounted cameras but allow dashboard-mounted ones. In general, you will obey the law by positioning your dash cam in a way that does not obstruct your vision. Only Missouri and North Carolina do not have any restrictions on windshield obstructions.

Most states also have similar laws against audio recording without permission. If you follow these two essential laws and do not let your dashboard camera distract you, you should generally be within the law in Texas.

When to Contact a Car Accident Lawyer in Texas

If you get into a car accident in Texas and you or someone else involved in the crash has dashboard camera footage available, you may still need help from an attorney to successfully resolve your case. It can be difficult to go up against an insurance provider – especially when the provider is attempting to take advantage of you to save money. Hiring an attorney to represent you can allow you to combat insurance tactics and negotiate for fair financial compensation.

For more information about cases involving dashboard cameras in Texas, contact an attorney at the Law Firm of Aaron A. Herbert, P.C. for a free consultation.