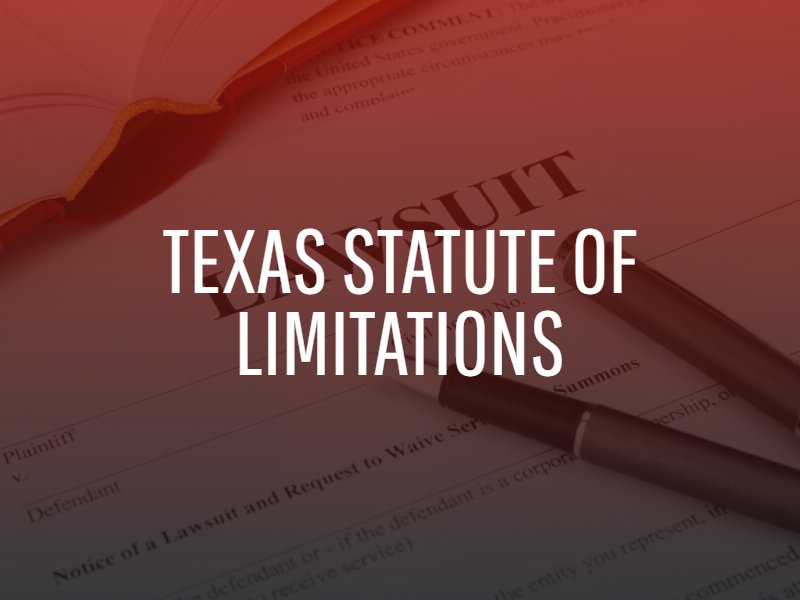 Statutes of limitations help keep the justice system just. Without a law requiring plaintiffs to file their personal injury claims by a certain time, a plaintiff could feasibly wait as long as he or she wanted to file. This delaying of justice might not be fair for the defendant, who could lose opportunities to defend himself or herself with the loss of evidence over time. Enforcing statutes of limitations keep things moving through the justice system more efficiently by prompting claimants to file as soon as possible. It is important to know your statute of limitations in Texas if you wish to protect your right to bring a claim.

How Long Is the Statute of Limitations in Texas?

It is important to ask an attorney what your statute of limitations is early on, so you do not accidentally miss your deadline. Some exceptions to the general rule exist; however, the courts will only toll, or extend, a statute of limitations in rare circumstances in Texas. If, for example, you did not discover your injury or illness until a date later than that of the accident, the clock generally will not start ticking until the date of discovery. Other exceptions exist for certain cases with minors (those under 18) and criminal offenses.

Exceptions to Texas’ statute of limitations exist for claims arising from certain crimes, according to Section 16.0045 of the law. If the claim involves alleged child sexual assault, child sexual abuse, child sex trafficking, prostitution of a child, indecency with a child or other such sex crimes against children, the survivor will have 30 years from the date of the offense to file a civil claim. Another exception to the general rule is in a case based on exposure to asbestos or silica. For asbestos-related injuries, a victim has two years from the date of the exposed victim’s death or the date the claimant serves on a defendant to file. This exception exists because asbestos exposure typically does not result in discoverable illnesses until years later.

Statutes of limitations are complicated. The law in Texas can have exceptions in special circumstances. Always speak to a personal injury lawyer about your deadline to file as soon as possible after an accident in Texas.