Many of us have seen over a hundred reports of severe car crashes in the news or in person on the road. On average, according to The Association for Safe International Road Travel, the United States reports about 37,000 fatal traffic accidents per year with an additional 2.3 million traffic accidents that resulted in a serious or life changing injury.

In Texas, one of the largest states in the U.S. with a staggering population of over 29 million, The Department of Transportation reported that a substantial traffic accident had occurred every 59 seconds in the year 2017. On top of that, a traffic related fatality had occurred every 2 hours and 21 minutes. According to the NHTSA, a total of 3,711 fatal car accidents had occurred in the state of Texas alone in 2017. For that year, Texas held the highest count of statewide crash fatalities. 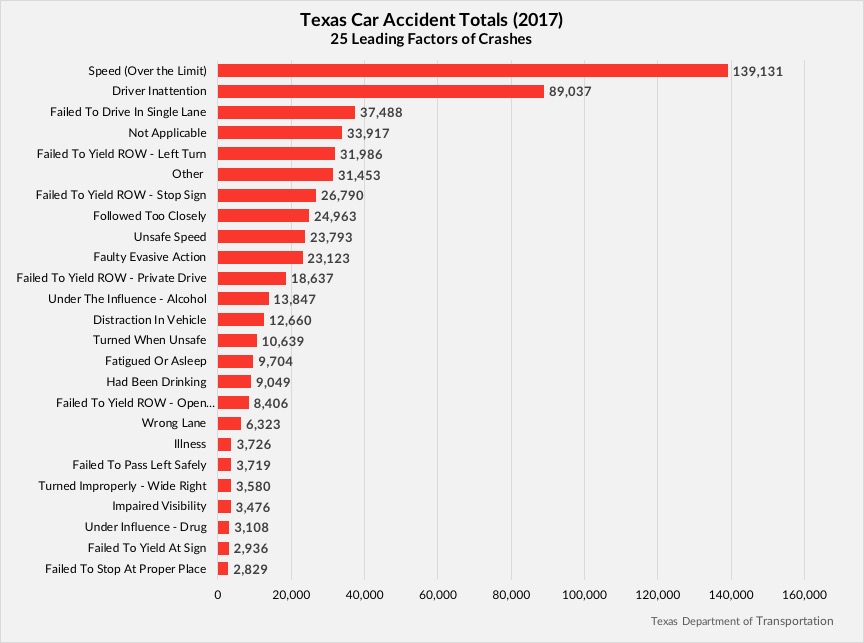 Why So Many Car Accidents?

The data shows us that the top 3 contributing factors with the highest totals were:

According to the department’s data represented in the table, Speeding over the limit was the most prominent cause for general traffic related accidents. It’s also one of the top 3 causes traffic fatalities in 2017, with failure of driving in a single lane as the number 1 factor of car accident deaths in Texas.
We noticed that other speed related factors had showed up in the top 25 table with “unsafe speed” totaling 23,793 accidents
Looking closer at the contributing factors of fatal crashes, the 3 highest contributing factors of accidents resulting in deaths were: 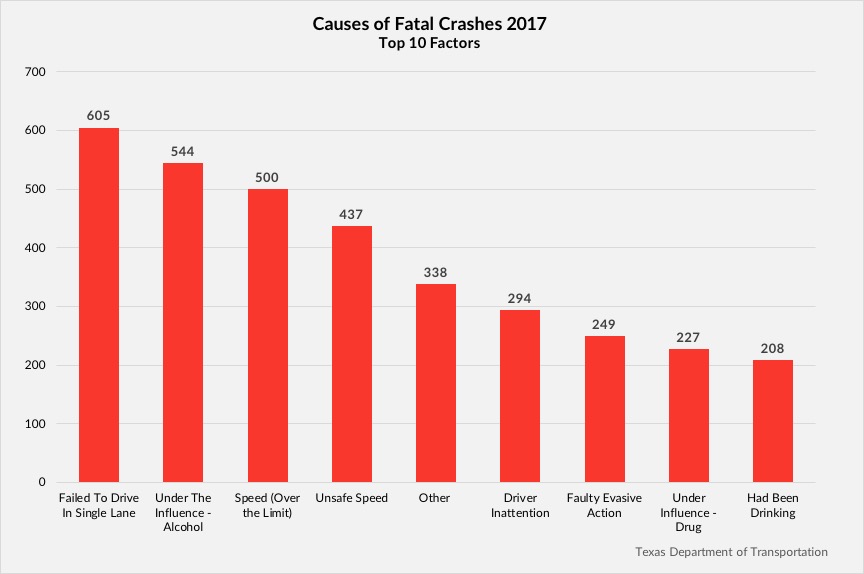 What is “Failure to Maintain in a Single Lane?”

To define this behavior of fatal traffic accidents, failure to maintain in a single lane (FTMSL) is a common highway offense where a driver fails to keep the vehicle inside of the lines of the lane divider or edge line.
Not referring to vehicles safely making a lane change, FTMSL refers to drivers who veer or drift out of their lane either because they are distracted, intoxicated or driving negligently. Drifting into another lane can lead to severe side swiping accidents especially when driving on the freeway at a fast speed surrounded by other vehicles. FTMSL combined with other factors such as speeding or distracted driving can lead to devastating consequences and severe punishment in the state of Texas.

What if I’m a Victim of an Accident?

The Department of Transportation says a traffic related accident occurs almost every minute in the state of Texas. If you have unfortunately experienced a car accident due to the negligence of other drivers and suffering from the damages, it’s best that you seek immediate help from an expert in traffic law.
A certified Dallas car accident lawyer will be able to help victims of traffic accidents find the right compensation for medical fees, roadside services, lost wages, pain and suffering or any serious life changing outcomes. There is help out there no matter how severe the damages are. Learn more by contacting your local injury law firm and speaking with a representative who can assess your needs.