Examples of Walmart Slip and Fall Settlements: What Does Their Policy Mean? 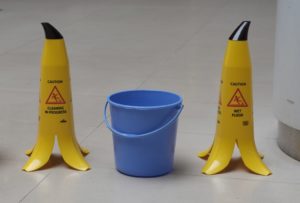 Save Money. Live Better. This is Walmart’s promise to patrons who shop at its approximately 601 Texas stores. But when Walmart fails to maintain a safe environment, you can be left with a devastating new normal that falls short of what Walmart promised.

Slip and fall victims are left to pick up the pieces and deal with the social, emotional, and legal fallout.

Instead of being crushed under the weight of immense medical bills and lost wages, you may decide to pursue compensation. But you may want to know examples of Walmart slip and fall settlements amounts before you act.

We’ll give you a few examples of slip-and-fall settlement amounts when patrons have sued Walmart. We’ll also explore the types of compensation you may receive. Keep in mind that these are just examples. There’s no guarantee that you will receive a certain amount for your case.

The best way to understand and maximize the compensation you can receive for your Walmart slip and fall settlement is to talk to a legal professional.

The Law Office of Aaron Herbert includes two Board Certified personal injury trial lawyers. Our team fights for our clients and makes them feel valued. Unlike Walmart’s insurance adjusters, we’ll always treat you like a person, not a dollar sign.

When considering slip and fall settlement amounts, Walmart cases can vary widely. What’s more, many out-of-court settlement details are kept confidential. Defendants like Walmart don’t want the information public, so they agree to pay out only if certain things are private. That said, jury awards are typically public.

Let’s go over the damages awards when plaintiffs sue for a slip and fall in Walmart. Settlements and awards listed here are among those that have been made public.

Linda Watts Gets $1.4 Million for Torn Rotator Cuff and Dislocated Shoulder in 2021

In 2021, a jury awarded plaintiff Linda Watts $1.4 million in a slip and fall case involving a Georgia Walmart. She tore her rotator cuff and dislocated her shoulder when a soaked rug caused her to slip and fall on the stone floor.

In 2017, an Alabama man received a $7.5 million verdict in a case against Walmart. He broke his hip while shopping for watermelons displayed on a pallet. Multiple other customers had gotten their feet stuck in the wooden pallet leading up to the unfortunate fall leading to the man’s broken hip.

Judy Demeritt slipped and fell because a large amount of condensation had built up around a dairy cooler at a Florida Walmart. After a seven-day trial, the jury awarded Judy $2 million in compensation for her injuries, finding Walmart 100% at fault.

A jury found another Florida Walmart at fault for the injuries Jessica sustained when she fell near the entrance of a bathroom. Evidence revealed that Walmart and the store manager had multiple opportunities to help Jessica after her fall but did nothing. This likely contributed to the jury’s award of damages in her favor.

What Compensation Can I Receive for My Slip and Fall Case Against Walmart?

With those examples as our backdrop, let’s go over the types of compensation you might receive in a typical slip-and-fall settlement.

There are two broad types of damage awards: economic and noneconomic damages. Economic damages compensate you for the financial loss of the injury or accident. Such losses include past and future medical bills, lost wages, or prescription costs.

In contrast, non-economic damages compensate you for the human cost of the accident. These injuries aren’t as easily identifiable but are just as real. Included in this category are pain and suffering and mental distress.

Law Office of Aaron Herbert: Fighting for Texans Since 2010

If you or your loved one suffered a slip and fall in Walmart, contact our office today by calling 214-200-4878 to schedule your free consultation.

Our office seeks to obtain fair slip and fall Walmart settlements by fiercely negotiating on behalf of our clients. We will make sure that greedy insurance companies don’t walk over injury victims in their hour of need. If Walmart refuses to budge, our board certified personal injury trial lawyers aren’t afraid to take the fight to court.