If a driver leaves the scene of an auto accident without stopping and fulfilling his or her legal obligations, it is the crime of hit-and-run. Texas takes hit-and-run crimes seriously, penalizing perpetrators with consequences such as hefty fines and potential jail or prison time.

As a driver, it is important to know Texas’ hit-and-run laws to stay out of legal trouble. It can also help you understand your rights if you become the victim of a hit-and-run accident. 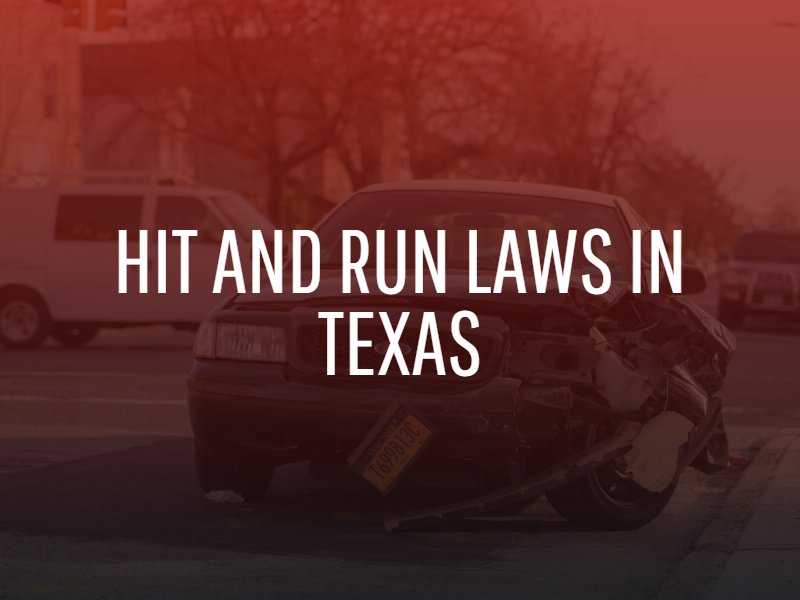 What Is a Hit-and-Run?

Motor vehicle drivers have dozens of responsibilities they accept when they get behind the wheel. One of these duties in Texas is to stop at the scene of any accidents. State law requires you to pull over immediately after getting into a car accident, whether the vehicle you struck is occupied or unoccupied. You must park as close as you safely can to the scene of the collision and check for injuries. State law requires you to do your best to assist anyone with injuries, such as by calling the police or offering the victim a ride to the nearest hospital.

If the car accident involves a personal injury, fatality, broken roadway law (e.g. a drunk driver), uninsured driver, property damage above $1,000 or a hit-and-run, call the police to report the crash from the scene. Note the location of the crash, the names of those at the scene and the contact information of any witnesses. Obtain the other driver’s insurance information if he or she stayed at the scene. Always call the police after a hit-and-run so they can inspect the crash scene for evidence that could identify the at-fault driver. Failing to stop at the scene of a wreck and fulfill your driver’s duties is a hit-and-run crime.

What Are the Legal Responsibilities After a Car Accident?

If the car accident involved striking an unattended vehicle, the legal responsibilities are to locate the owner or leave a note in a conspicuous place with your name and address. If the collision was with a fixture or highway landscaping, you must take reasonable steps to report the accident to a person of authority. If the damage is worth more than $1,000, you must also file a police report.

Failure to fulfill these legal responsibilities after a car crash in Texas is a hit-and-run.

Can You Deny a Hit-and-Run?

The biggest issue with hit-and-run accidents is identifying the driver that caused the damages. The responding police officers may take steps to try to identify the driver that fled the scene, such as examining any debris or paint chips the offending vehicle left behind or talking to eyewitnesses. Sometimes, however, the police make mistakes. Upon reviewing surveillance cameras, monitoring the neighborhood and taking other steps to identify the hit-and-run driver, the police may apprehend the wrong suspect.

If the police wrongfully accuse you of committing a hit-and-run, you have the right to deny the charges and plead not guilty. With a lack of evidence against you, the prosecution may have no choice but to drop the charges. If the prosecution has evidence putting you at the scene of the crime, however, the criminal courts may proceed with the case and even find you guilty, depending on the circumstances.

Hit-and-run is a crime in Texas, not just a civil wrongdoing. A conviction can come with serious criminal consequences. Always remain at the scene of an auto accident to avoid criminal charges.

What Is the Penalty for a Hit-and-Run in Texas?

Causing a car accident and driving away without stopping can have criminal and civil ramifications. On the criminal level, leaving the scene of an accident can result in a misdemeanor or felony conviction. The severity of the crime will depend on the seriousness of the injuries or damages caused. It could be a felony if the hit-and-run causes serious bodily injury or death. The penalties for hit-and-run in Texas include six months in county jail to 10 years in state prison and/or fines of $500 to $5,000 or more.

The civil consequences could include having to pay for a victim’s damages in restitution, either through the at-fault driver’s auto insurance company or out of pocket. If you are the victim of a hit-and-run accident in Texas, you could be eligible for compensation if the police find who caused your crash. If the police do not catch the perpetrator, you may still be able to obtain compensation through your own uninsured/underinsured motorist insurance, if available.

What Should I Do If Someone Hit Me and Fled the Scene?

If someone hit you in Dallas, Texas and fled the scene without stopping, rendering aid and exchanging information, there are certain steps you need to take to ensure the full protection of your legal rights. Your car accident case will look different from a standard crash, where you would have the other driver’s information.

If you are able, take the following steps to protect your rights as the victim of a hit-and-run accident:

A hit-and-run accident attorney in Dallas can guide you through the claims process to make sure you do not settle for less than your case is worth. Your lawyer can search for sources of financial compensation, including your own insurance provider or a third party, such as the government. From there, your lawyer can negotiate with a claims adjuster for fair and full compensation for the full extent of your losses.

If a settlement is not possible, your lawyer can take your hit-and-run accident case to court instead.

A hit-and-run car accident will lead to a confusing legal process. The right car accident attorney can make things easier for you and your family by taking over a legal claim on your behalf. You do not have to handle a lawsuit on your own. Talk to a Dallas injury lawyer for more information about your case.